“The Fall of Mankind” Sin, Death and the Curse 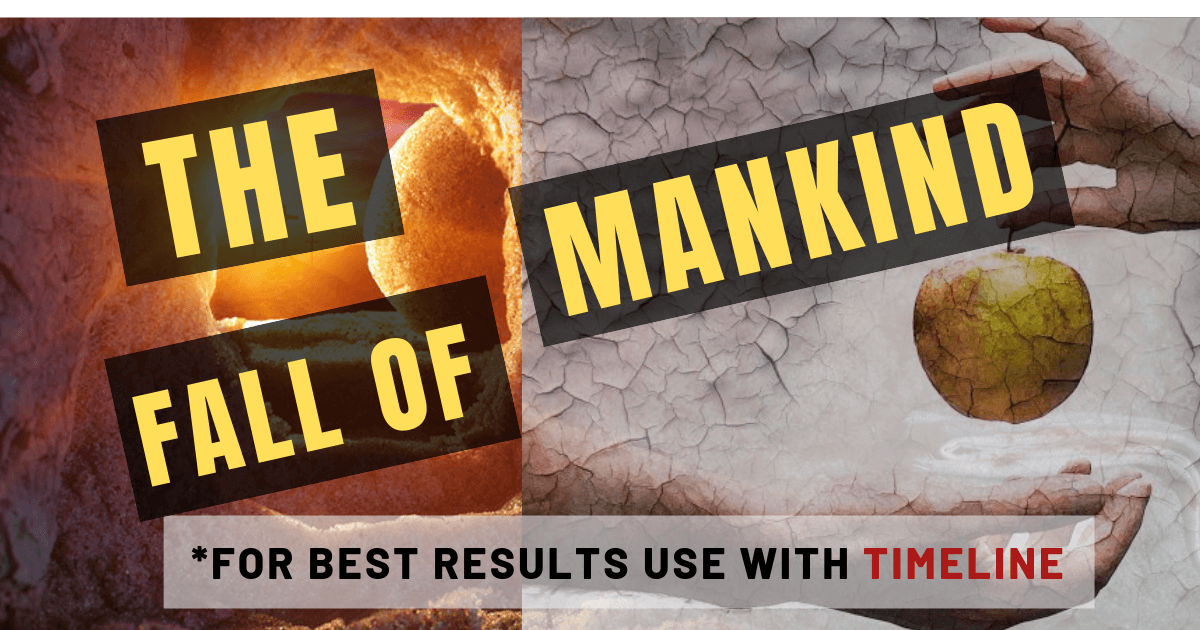 ‘Therefore, just as through one man (Adam) sin entered the world, and death through sin, and thus death spread to all men, because all sinned— ‘

Before Adam disobeyed God there was no death, no curse because there was no sin. Adam and Eve were in perfect relationship with God. They were eternal beings sustained by the “tree of life” the herbs and fruits God provided. Even the animals ate herbs there was no death of any kind for any reason. Everything was perfect. (Genesis 1:31)

The very moment Adam and Eve disobeyed and ate of the fruit God commanded them not to eat they died spiritually. They did not die physically but they did become mortal beings. Adam lived to be 930 years old. (Genesis 5:5) Their immediate death was spiritual, their connection and relationship with God were severed because of sin. Because of Adam’s disobedience, sin and death entered the world and plunged the entire planet under the curse. From Adam and Eve onward every human being born (except Christ) is born with a “sin nature” and severed from any relationship with God. (Romans 5:12, 8:7, 1 Cor 2:14)

Best Read with our Biblical Timeline

This post will examine the origin of “The Fall” of mankind. And how sin plunged the entire planet under the curse. This article is by no means an in debt study into the Fall of Man and Sin. The Fall and sin are both covered in great detail as part of our 6-week introduction class. This article is intended to be used as companion content for our Biblical Timeline.

Just Three Chapters in and Failure

Only three chapters into the Bible mankind falls or fails miserably. Adam’s disobedience brings sin and death upon the earth. The entire planet is cursed.

The Lord God commanded the man, saying, “From any tree of the garden you may eat freely; but from the tree of the knowledge of good and evil you shall not eat, for in the day that you eat from it you will surely die.”

God Blessed Adam and Eve with Everything

When God created Adam and Eve, He gave them dominion over all the earth. That included every living thing; the birds, fish, all animal life. Mankind was given dominion over everything and told to subdue it. (Genesis 1:28) Adam and Eve were eternal beings they received sustenance from the “tree of life” herbs and fruits God provided. Even the animals ate herbs and fruits for sustenance the entire planet was vegetarian.   Mankind Ate Fruits and Herbs before the Fall.

‘And God said, Behold, I have given you every herb bearing seed, which is upon the face of all the earth, and every tree, in the which is the fruit of a tree yielding seed; to it shall be for meat. ‘

God gave Adam and Eve dominion over everything He created, they were to enjoy God’s company, enjoy all that He created for them, and multiply the earth. With just ONE COMMAND;

‘And the Lord God commanded the man, saying, Of every tree of the garden thou mayest freely eat: But of the tree of the knowledge of good and evil, thou shalt not eat of it: for in the day that thou eatest thereof thou shalt surely die. ‘

Sin Started with a Question

Satan operates no differently today than he did 6000 years ago. Nothing has changed. Sin is sin and sin began with a Question! Today satan and his cast of demons deceive humanity using the exact same method satan used in the garden. As the Paul makes so clear in 2 Corinthians 11:3.

‘But I fear, lest somehow, as the serpent deceived Eve by his craftiness, so your minds may be corrupted from the simplicity that is in Christ. ‘

The Seed of Deception “The Question”:

‘Now the serpent was more cunning than any beast of the field which the Lord God had made. And he said to the woman, “Has God indeed said, ‘You shall not eat of every tree of the garden’?”’

‘And the serpent said unto the woman, You shall not surely die: For God doth know that in the day you eat thereof, then your eyes shall be opened, and you shall be as gods, knowing good and evil. ‘

And when the woman saw that the tree was good for and that it was pleasant to the eyes, and a tree to be desired to make one wise, she took of the fruit thereof, and did eat, and gave also unto her husband with her; and he did eat. ‘

The very moment Adam and Eve ate of the tree that God commanded them not to eat they died. Not physically, they died spiritually and they knew it. (Genesis 3:7)  Compare Genesis 2:25 which is before the fall to Genesis 3:8,10 which is after the fall. Before the fall. No shame or guilt in their nakedness. There was no evil present, no sin, no knowledge of evil.

‘And they were both naked, the man and his wife, and were not ashamed.’

After the Fall. Immediately they were convicted they experience guilt, fear and they were ashamed of their nakedness. They knew what they did was wrong.

The results of sin are the same at any time in human history. Worldly sorrow is brought on by sin. The conviction of sin leads to guilt, shame, despair and a feeling of complete hopelessness which leads to death.

The world has nothing to offer mankind to remedy sin. Only God can deal with the sin dilemma and He did. (John 1:29)

‘The next day John saw Jesus coming toward him, and said, “Behold! The Lamb of God who takes away the sin of the world! ‘

All of creation is waiting for that glorious day when it too will be released from the curse. Yes the animals, the trees every living thing is awaiting the unveiling of the Redeemer. (Romans 8:19-22)

‘For the earnest expectation of the creation eagerly waits for the revealing of the sons of God. For the creation was subjected to futility, not willingly, but because of Him who subjected it in hope; because the creation itself also will be delivered from the bondage of corruption into the glorious liberty of the children of God. For we know that the whole creation groans and labors with birth pangs together until now. ‘

God Already Had a Plan of Redemption

God could have just taken Adam and Eve off the scene and started over. But because of His love, mercy, and grace, (Ephesians 2: He saved them by killing an animal instead, which was a shadow of another sacrifice God would make. A Great sacrifice that would Redeem the world back to Himself. (2 Corinthians 5:18-19)

God’s plan of redemption, of course, is Jesus Christ and His shed blood on the cross, His burial, and resurrection from the dead three days later. Which paid the price for all of mankind’s sin.

God declared to the world that His Son did everything He demanded to pay the sin debt for ALL:

‘Therefore, when He came into the world, He said: “Sacrifice and offering You did not desire, But a body You have prepared for Me. In burnt offerings and sacrifices for sin, You had no pleasure. Then I said, ‘Behold, I have come— In the volume of the book it is written of Me— To do Your will, O God.’ ”’

All anyone has to do is believe it.

‘that if you confess with your mouth the Lord Jesus and believe in your heart that God has raised Him from the dead, you will be saved. For with the heart one believes unto righteousness, and with the confession is made unto salvation. ‘

If you have any questions about this article, salvation, the Christian life, don’t hesitate to respond below.

← Prev: Only 9 Gentiles Saved in 2000 Years Next: God Is Sovereign Believe What He Says →

The page you requested could not be found. Try refining your search, or use the navigation above to locate the post.